The four-channel Keysight (ex-Agilent) MSO-X 3024A oscilloscopes in VHE 205 have special triggering modes that allow them to capture RS-232 serial data transfers and display them. These triggering modes should be used whenever looking at these signals rather than just using the standard edge triggering. This web page briefly describes how to setup the scopes to acquire RS-232 data and display it.

The RS-232 communication standard actually only refers to the hardware and electrical characteristics of the signals, but over the years many people also use the term to refer to the timing and format of the signals. "True RS-232" uses signals that use positive and negative voltages like −8V for a logical 1, and +8V for a logical 0. In EE109 we often instead use what people sometimes call "TTL serial" which uses the same timing and signal format at normally used with RS-232 but uses +5V for a logical 1 and 0V for a logical 0. The Keysight scopes can display TTL serial signals in the same manner as the true RS-232 ones by making a couple changes to the settings. To view TTL serial signals, follow the steps below but look for places where it says to make changes for viewing the TTL serial signals.

To view RS-232 data transfers follow the steps below. If at any time during the setup you want to make a menu disappear from the screen, press the "Back" button near the lower right corner of the screen.

At this point the scope is configured to trigger on a RS-232 start bit. Press the "Single" button in the upper right to put the scope in a state where it will wait for the next start bit and then capture the data. Do whatever is needed on your project board to get it to generate the RS-232 transfer, and once the data has been captured it will be displayed on the screen as shown below. 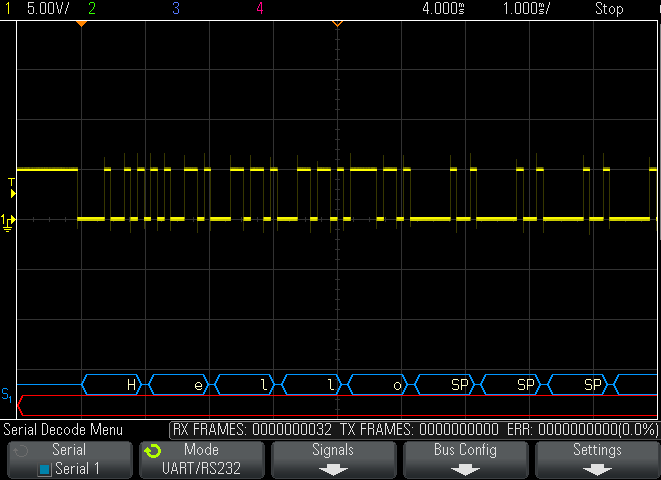 The bottom portion of the screen should show the contents of each byte in the the RS-232 transfer as an ASCII character. The space character is indicated as "SP". If you wish to see the data in hexadecimal, go back to the Settings menu and change the Base to Hex. When displayed in hex, the hex values only show the 8-bits contents, not the start or stop bits.

The captured data can be expanded or shrunk horizontally using the horizontal scale control. If you shrink the data to try to see more of it, it may not show up since the scope only stored the part that was to be displayed. In this case you will have to repeat the acquisition of the data to capture more data. The smaller knob in the horizontal section can be used to move the display left or right to see all parts of the RS-232 data.