This is an individual assignment. The code you write, use for the demo and submit should be wholly your own and not produced by working in teams or using, in part or in whole, code written by someone else (found online, from a fellow student, acquaintance, etc.). You will be asked to verify this when you submit your code on Vocareum by signing your name in the honor.txt file on Vocareum. Penalties for violation include a 0 on the assignment and a potential further deduction or referral to Student Judicial Affairs.

In this lab exercise you will use the Arduino's analog-to-digital (ADC) conversion capability to interface the microcontroller to a variable resistor, also known as a "potentiometer", and also to the buttons on the LCD module. The goal is to be able to implement a very simple video game on the LCD using the potentiometer and the buttons as the player's control. Writing the program will involve learning how to configure the ADC module by setting various register bits, how to initiate a conversion and how to draw characters on the LCD screen based on the conversion results.

For a copy of the Lab 6 grading sheet click here.

Set up your Lab 6 assignment the same way we have done previous in labs by making a lab6 folder in your ee109 folder. You can copy the Makefile, lcd.c and lcd.h from Lab 5 to the lab6 folder.

From the class website download the file "lab6.zip" and extract the contents into the lab6 folder. The Zip file contains four files:

In previous labs we put the routines for the LCD in a separate file, lcd.c, with the function definition in lcd.h. For using the ADC, we now want to do the same thing by having the ADC functions and definitions in the files adc.c and adc.h.

Make sure to update your Makefile to replace lab5.o with lab6.o, and also add adc.o to the OBJECTS line.

Information on using the ADC module is available in a lecture slide set. A more in-depth review of this material is provided in a separate document "Using the Atmel ATmega328P Analog to Digital Conversion Module" available on the class web site. Refer to any of these resources for information on configuring the various registers in the module and how to do the conversions.

The adc.c files contains the template for two routines that you will have to write.

The adc_init routine must set up the proper values in the ADMUX and ADCSRA registers. Diagrams of the registers are provided on the Lab 6 grading rubric for you to fill in the values.

The routine should do the following.

The buttons on the LCD use the ADC to determine which, if any, are being pressed. This is different than how buttons in previous labs were interfaced to the Arduino. Rather than having all the LCD buttons produce an individual digital signal, all five of them are instead interfaced through a multistage voltage divider creating a single analog signal that can be measured by the ADC. Depending on which button was pressed, or none, this circuit produces a different voltage between 0 and 5 volts, and this signal is attached to the ADC Channel 0 input to the Arduino. By using the ADC to convert this voltage to a number it's easy to determine if one of the five buttons was pressed.

When a button is pressed the analog voltage on ADC channel 0 changes to a unique value that identifies the button that was pressed. However in order for your program to determine which button was pressed you have to know what the ADC output is for each button. The easiest way to do that is to write code to loop continuously reading the ADC result and writing the value to the LCD.

Use the ADC routines you just wrote to give the program the ability to use the ADC to read the button's analog signal. In the while(1) loop of the main routine add code to do the following.

Once the program is running, try pressing each button and see what value is displayed. You can record the values shown for each of the buttons on the Lab 6 grading sheet. These values will be used in later tasks. You should note that the ADC conversion results may not always be exactly the same each time a button is pressed. Due to electrical noise and thermal effects it may return, for example, 124 one time, 125 another and 126 yet another time. Your code must take this into account when working with the ADC results.

For this lab assignment one of the inputs to the ADC of the Arduino will come from a variable resistor or potentiometer (or "pot" for short) hooked up to be a voltage divider. A potentiometer as shown below is a three-terminal device that has a fixed resistance between two of its wires and a third wire, sometimes called the "slider" that can be adjusted to give anywhere from zero to the full resistance between the slider wire and the other two. In short, the potentiometer operates as a voltage divider (two resistors in series) where the resistance in the numerator can be adjusted by dialing/spinning the "pot". Turn it fully one direction and you will see 0V on pin 2. Turn it fully in the other direction and you will see VS (5V) on pin 2. At any position in between you should the voltage on pin 2 scale linearly.

In schematic diagram above of a potentiometer, the total resistance between the top and bottom terminals of the potentiometer is given by R. Internally R can be viewed as two resistors R1 and R-R1 and in series so the resistance between the top and bottom terminals is fixed at R. Changing the position of the potentiometer's control changes the resistance of R1. Since the value of R is fixed, as R1 increases, R-R1 must decrease by an equal amount, and similarly if R1 goes down R-R1 must go up.

When hooked up as a voltage divider as above, we can see that V is given by

As the position of the slider is adjusted the value of R1 can change from R (making V=VS) to zero (making V=0). By adjusting the slider we can get any voltage from 0 to V=VS to appear on the slider terminal that will be connected to the ADC input.

Get the potentiometer from the parts provided in your kit and examine it. The resistance between the two fixed terminals (R in the above) is marked on the top next to the round control that is rotated. It should say "102" which is the resistance in the same format as used for marking fixed resistors: 1, 0, and two more zeros = 1000Ω.

The circuit is shown below. Note +5V and ground to the potentiometer are connected to your Arduino board's 5V and GND connectors.

On the potentiometer, the two pins that are on a line parallel to the sides of the device correspond to the top and bottom pins as shown above. The slider pin is the one offset from the other two. 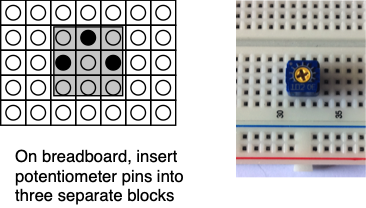 To confirm that you have it connected properly, use the multimeter to check that the voltage on the slider pin can be changed by rotating the control.

Before trying to use the potentiometer in the next part of this lab we recommend you check to see if it and the ADC routines are working. Your lab6.c file should still have the code to read the ADC value on channel 0 for the buttons. Change the channel number in the adc_sample function call to use channel 3 where the potentiometer is connected. Flash the new code to your Arduino, and then try rotating the potentiometer back and forth. The program should be displaying the numerical values of its conversions of the voltage on channel3, and these should be close to 0 at one end of the rotation and close to 255 at the other. If you are not seeing this, you will need to fix the problem before using the potentiometer and ADC code in the next task.

The game you are constructing works in the following manner.

To see a short video demonstrating the operation of game, click here.

At the start of the game the program should do the following.

Once the above steps have been done the program should enter an infinite loop for the playing of the game. Each time through the loop the following should be done.

When your program is running you should be able to

Once you have the assignment working demonstrate it to one of the instructors. The answers to the review questions below should be edited into the Lab6_Answers.txt file. The Lab6_Answers.txt file and all source code (lab6.c, lcd.c, lcd.h, adc.c, adc.h and Makefile) must be uploaded to the Vocareum web site by the due date. See the Assignments page of the class web site for a link for uploading.

Please make sure to save all the parts used in this lab in your project box. These will be needed for labs throughout the rest of the semester. We suggest also saving all the pieces of wire you cut and stripped since those will be useful in later labs.

Answer the following questions and submit them in a separate text file ("Lab6_Answers.txt") along with your source code.